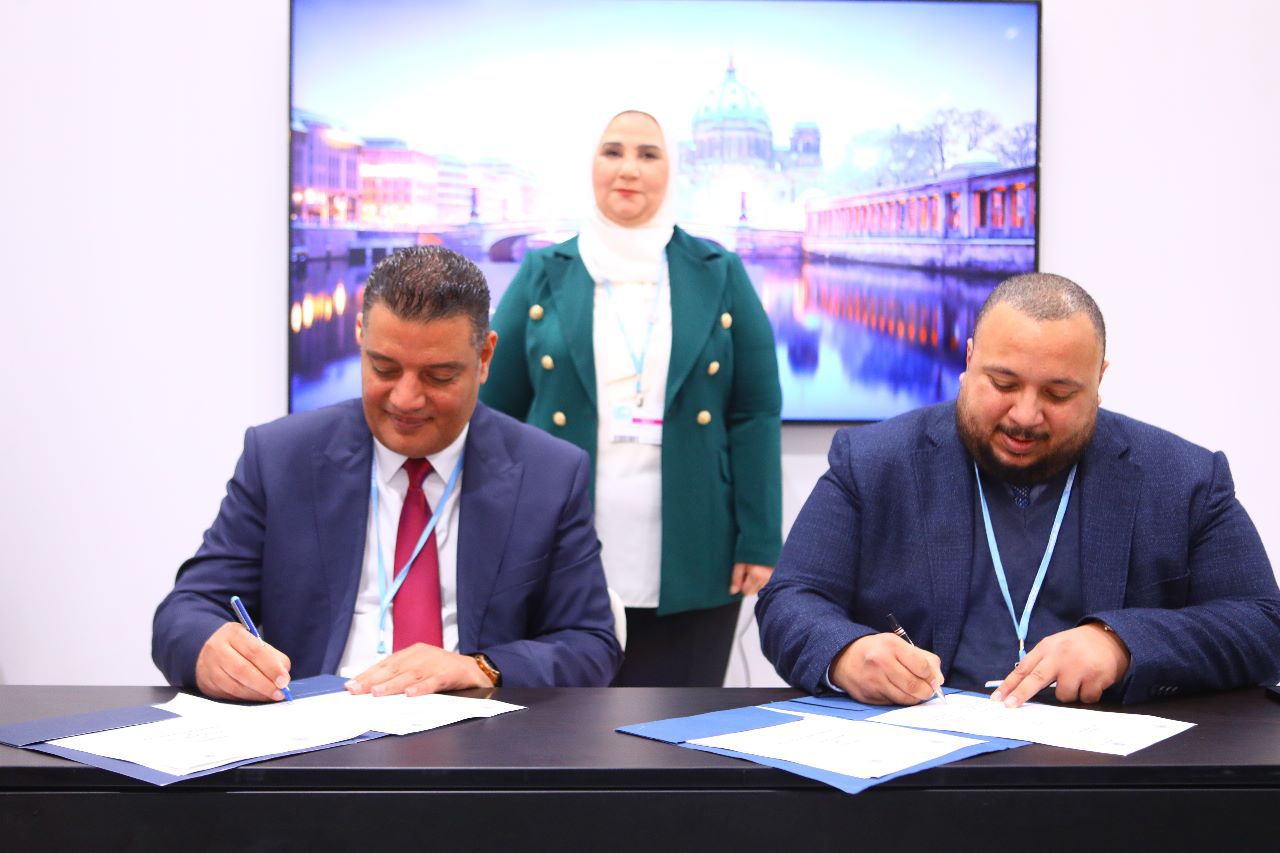 Our social and economic systems are heavily dependent on natural resources and their relative abundance and predictability. This hospitable exchange between human and nature which has fostered the development of our civilizations over thousands of years is now becoming less viable and less supporting for the many, before the few.

This is especially true for vulnerable and peripheral communities (frontline communities)1 who depend heavily on available natural resources for livelihood subsistence such as (farming, fishing, gathering), and are more vulnerable to multidimensional poverty as they are deprived of access to basic services and adequate environment (Food, Water, Air, and supporting biodiversity). A World Bank study estimates that globally by 2030, an average of an additional 130 million people will be pulled into extreme poverty, citing health deteriorations and increases in food prices as the most prevalent channels causing deterioration.2

To address this, with a record participation of 46,000 attendees, the largest in the history of the summit, the 27th United Nations Framework Convention on Climate Change (UNFCCC) Conference of Parties (COP27) was held during November in Sharm El-Sheikh, Egypt, and has delivered on several fronts. Most notably, there was the late yet much welcomed announcement on November 20th of a breakthrough agreement to provide a loss and damage fund for vulnerable countries hit hard by climate disasters.

“This outcome moves us forward” ... “We have determined a way forward on a decades-long conversation on funding for loss and damage – deliberating over how we address the impacts on communities whose lives and livelihoods have been ruined by the very worst impacts of climate change.”3 Simon Stiell, UN Climate Change Executive Secretary.

Another candle in the wind was lit by UN Secretary-General António Guterres upon announcing an Executive Action Plan for theEarly Warning for All Initiative, calling for an investment of $3.1 billion to provide a universal early warning system to include disaster risk knowledge, observations and forecasting, preparedness and response, and communication of early warnings in the coming five years.4 Moreover, remarkable as well as relevant to our strategic priorities for (2023-28) is the Sharm El-Sheikh Implementation Plan In response to the devastating impacts of climate change affecting vulnerable people all over the world, launched by COP27 Presidency in partnership with the High-Level Champions.5 The Sharm El-Sheikh Implementation Plan outlines 30 outcomes to enhance resilience for 4 billion people living in the most climate vulnerable communities by 2030.6

Meanwhile, the world looks towards civil, research and academic societies to increase access to and availability of historical, real-time data and evidence on climatic conditions, their effects and the vulnerability of various socioeconomic indicators of poverty. Sawiris Foundation for Social Development (SFSD) pushed forth gearing scientific efforts towards figuring out what works? And who are most vulnerable? to the effects of extreme weather and the rising hostility to natural conditions. Achieving this, the Foundation attended, participated in, and hosted several side events spanning across both the official UNFCCC “Blue Zone” and the more vibrant and colorful “Green Zone” under the auspices of the Ministry of Social Solidarity (MoSS). Our engagement was further mobilized in support to the role of the Ministry of Social Solidarity (MoSS) as an umbrella for civil society voice and action as well as the Ministry’s role in managing 800 remarkable volunteers on behalf of the Egyptian government and citizens during COP27.

At the Blue Zone

Evidence, Learning and real time data in the race to climate change adaptation among the poorest, most vulnerable communities was the title of the first Panel discussion, held on November 10th  which is dubbed as the “Science, Youth & Future generations” thematic day. The panel discussion was attended by Egyptian Minister of Social Solidarity H.E. Nivine El Kabbag and was moderated by our very own Abdelrahman Nagy Director of Learning & Strategy Department.

Held in the buzzing Civil Society Pavilion in the Blue Zone, sitting on the panel was Dr. Ahmed El Sayed Research Director at the Abdullatif Jameel Poverty Action Lab (J-PAL MENA), Dr. Mohsen Sarhan and Dr. Mohammed Elkaramany CEO & Director of Growth Lab from the Egyptian Food Bank, Dr. Abay Kibrom Country program lead of International Food Policy Research Institute (IFPRI) Egypt and Dr. Reham Rizk in her capacities as Head of economic planning unit at Ministry of Planning and Economic Development (MoPED) as well as the Director of Egypt Impact Lab (EIL). The side event was also attended by an array of Egyptian Civil Society actors and Government representatives perfectly positioned to address evidence generation on the climate-poverty nexus.  In his moderation, Mr. Nagy emphasized the significance of the role that the civil society can play to address climate change consequences given that it poses an economic and social threat to the Egyptian population. “Nowadays, the Delta and the North Coast are among the most threatened areas globally and its population among the most vulnerable to climate change. The world does not have the luxury to address climate change based only on good intentions, we should support evidence-based policies to support climate change adaptation and mitigation.”

On November 15th our engagement was further activated with a signing ceremony of an MoU with Ministry of social solidarity (NGO projects support fund) followed by a Panel with the participation of H.E. Nivine El Kabbag in the prestigious Egyptian Pavilion in the Blue Zone With the participation of Mr. Abdelrahman Nagy (SFSD), Dr. Ahmed El Sayed (J-PAL MENA), Dr. Riham Rizk  (MoPED), and moderated by Ahmed Hamdy (Principal strategy Officer) at Sawiris Foundation.

Her Excellency stressed the importance of the role played by civil society in supporting national efforts to reduce the effects of climate change. She also highlighted the importance of social protection programs, especially evidence-based and data-driven, in protecting populations most vulnerable to climate change. Furthermore, Her Excellency pointed out the importance of making the results of studies, research and data available to the general public of civil society workers, in a language that is easy to understand and apply, which helps bridge the gap between scientific evidence and policy-making at the level of civil society and government agencies. Abdelrahman Nagy, further indicated that the Foundation will work to make a lot of information, data and evidence-based solutions available to civil society organizations to support their efforts to reduce the effects of climate change and support evidence-based programs to protect groups. Most vulnerable to the repercussions of climate change and the completion of national efforts.

This session held on “Solutions Day” tackled the Multidimensional Poverty Index (MPI) as a tool for monitoring and evaluating the impacts of climate change on Health, Education and Living standards. The discussion included the concept of the MPI and the different aspects of deprivation that it takes into account in addition to financial poverty, which contributes to the design of more appropriate development policies and programs. Panelists also reviewed the initiatives of the "Decent Life" and the "Egyptian Impact Lab" within Egypt's Vision 2030 with the support of effective civil society with the aim of eradicating multidimensional poverty in Egypt. The outcomes of the dialogue came to emphasize that poverty eradication is an integral part of climate change mitigation steps and the protection of the most vulnerable and needy populations.

At the Green Zone

As for the vibrant, more grass root Green Zone built within the Peace Park as a platform for business community, youth, civil and indigenous societies, academia, artists and fashion communities from all over the world can express themselves and their voices would be heard via events, exhibitions, workshops, cultural performances, and talks.7 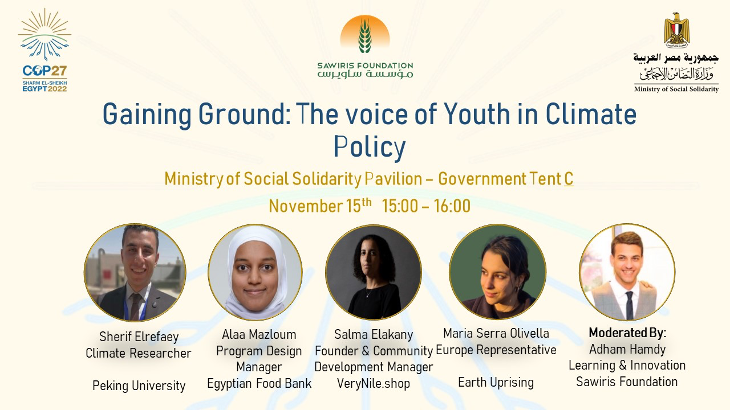 Utilizing the huge network of Youth activists and advocates present at COP27, SFSD team represented in Adham Hamdy (Learning & Innovation officer) at Sawiris Foundation hosted & moderated a panel titled Gaining ground; youth voices in climate policy making. The panel was attended by  Sherif El-Refae climate researcher Peking University and a member of Earth Uprising, Salma Ellakany Founder of VeryNile.shop, Alaa Mazloum Program Officer at Egyptian Food Bank and Maria Serra Olivella member of Earth uprising Barcelona. The discussion revolved around the role of advocacy and advocacy tools as opposed to being on negotiation tables as different youth strategies to gain decision making ground, as well as the various environments for youth climate activism across the globe. You can find a recording of this session here.

Our support to the Ministry of Social Solidarity and the team technical volunteers has resulted in the successful delivery of the Green Zone Pavilion including Dyrana handicrafts gallery, and facilitating the planning and delivery of more than (30) sessions in the Green Zone civil society spaces, serving as a testimony to our role as capacity builders and facilitators of dialogue and action amongst Egyptian Civil Society.

As an evidence-based philanthropic organization that seeks to reduce multidimensional poverty and empower agents of change, Sawiris Foundation is placed as a catalyst, more so after COP27 in climate change mitigation, adaptation and resilience building through poverty alleviation agendas. In conclusion, Sawiris Foundation looks forward to holding more partnerships and collaborations with our key government, scientific and implementing partners, on bringing forth and advocating for key issues of climatic resilience and adaptability of the poorest communities in Egypt.

Adham is the Learning & Innovations Officer and has been at SFSD since 2021. Adham Represented Sawiris Foundation during COP27 (Nov. 2022) and completed a successful secondment assignment to Ministry of Social Solidarity during the same period. Previously, Adham consulted on reform of G2B services delivery for the EBRD. Is an alumnus of the Danish Egyptian Dialogue Initiative DEDI and worked at the Egyptian National Competitiveness Council (ENCC). Adham Graduated in 2020 with an MA is Social & Political Thought from University of Sussex, UK, and holds a Bachelors of Arts in Political Sciences from the American University in Cairo in 2015 and is a strong advocate for ecological/circular economic policy and socioeconomic solidarity, inclusion and equality. (Contact:ahamdy@sawirisfoundation.org )